Kroger sells a product they call “Fat Free Half & Half.” Half & Half is supposed to be half cream, half whole milk, with a butterfat content of about 12%. TWELVE PERCENT. What’s the story, Kroger?

I invite spokespeople from Kroger, all members of the dairy industry, and anyone who has ever tried this product to comment.

I feel like the kid who just found out about Santa Claus, or, in keeping with the season, the Easter Bunny.  My illusion has just been shattered.

Ozarka® water is not made in Arkansas.

I just assumed it was.  But what do I know, I live in Arkansas.  Nonetheless, I was just being logical, or intuitive, at least.  “OZARKA” sounds like it’s from around here, our “Natural State” of hot springs and rolling hills and trout fishing.  And the Ozark Mountains.

Ozarka’s packaging boasts it’s made in Texas.  Texas?  Texas water?  Is that supposed to be good? I grew up in Houston.  I think the tap water in Little Rock tastes better. And there’s no such place as Hot Springs National Park, Texas.

Pull back  the curtain, Toto.  Egad, the Wizard of Ozarka is just one of many brands pumped out by Nestlé Waters North America.  Thus we have an Arkansas-sounding label coming from the Texas operations of a North American company based in Switzerland. Yodelayheehoo. 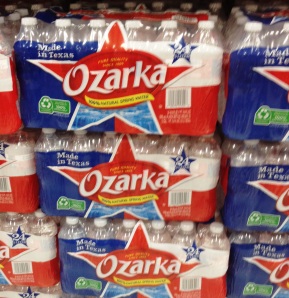 Oh well, it’s just water, the commodity that’s increasingly never common.  Last time I checked, a liter of Evian was selling for $1.99 at the local Kroger.  A liter of Kroger’s store-brand water was 69 cents.  That’s a 188% premium for Evian. Some people take this brand thing way too seriously.  And the marketers smile.

IMPORTANT UPDATE – 11 DECEMBER 2018:  THE KIOSK HAS BEEN REMOVED! THERE IS NO LONGER THE KIOSK OPTION AND THE CUSTOMER HAS TO WAIT IN LINE AT THE COUNTER! WE HAVE GONE BACKWARD IN TIME!

I have spent too much of my life waiting at the Kroger deli counter.  A fortnight of quiet desperation and longing for my Private Selection Honey Turkey to be sliced at 1.5 thickness. It has always been a dreaded task, especially during peak shopping hours.  A necessary sacrifice of time to get the good stuff. Prepackaged meat never tastes the same.

My wait is over. Kroger’s self-service, touch-screen deli ordering system. Kroger must have taken a took a cue from the queueless – the Fastpass® system that’s made visits to Disney theme parks so much more efficient and enjoyable.

Kroger’s process is very similar to getting a place in line at a Disney World ride.  You enter your order in detail, you get a ticket, you come back fifteen minutes later, and wham-bam there it is, sitting in a wicker basket with your number on it. The greatest thing since sliced pastrami.

Kroger has smartly included a cross-selling function. When I ordered turkey, Kroger pitched me some Swiss cheese. I almost took them up on it. Maybe next time. And there will be a next time. This is how I roll now.

On the busy, pre-ice-storm day I was at Kroger, I seemed to be the only one taking advantage of this automated ordering system. Other shoppers stacked themselves two-deep, ignoring the new process and loudly repeating their desires for meat and cheese across the glass case to the deli staff. Good service includes self-service. It takes time for customers to catch on to that. 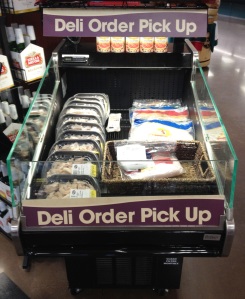 My order was there on time and Kroger even attached a $1-off coupon. Who said you can’t have “Good, Fast and Cheap” all at the same time? Oh yeah, I did.

There’s an old saying in advertising agencies and other purveyors of promotion production:  “Good. Fast. Cheap. Pick any two.” 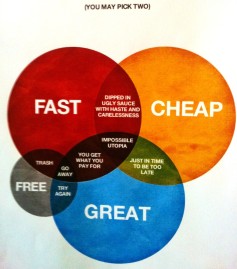 Stock photography is cheap and fast.  But it’s not always good. 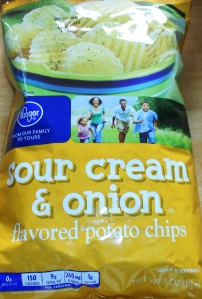 I bought this package of Kroger potato chips because they were half the price of the Lay’s brand. Results: They taste good.

Note how Kroger’s logo sits atop the ho-hum tagline, “From our family to yours.”  That’s the connection to the photo of the happy, romping family of four:  the family is running joyfully through tall, green grass to get those delicious potato chips at their nearest Kroger store.  I can almost see the thin thread connecting brand to imagery to product. Almost.

A bland photo on a package doesn’t add or subtract anything.  It’s just there.  An excuse to print in four-color process.

You might luck out and find a stock photo that’s exactly what you want. In that case, save the money and go with stock.  But remember that same photo might show up in other places.  You didn’t take that picture. You don’t own it.

I’ll be looking for the potato-chip family to pop up in a life insurance ad.